Unfortunately a new beach invader has just been discovered on our Far South Coast beaches at three widely separated sites.

Just how Dune Onion Weed reached the Far South Coast is a matter of speculation but the plant is very well set up to travel.  The flower heads are reported to break off when the seed is mature and roll along beaches like tumbleweeds, shedding seed as they go.  Seeds immersed in salt water remain viable after 8 months, long enough to travel very long distances in ocean currents.
This weed, of South African origin, is already a major problem on the West Australian coast and has also appeared in South Australia and the NSW Central Coast, but has never before been reported locally.
Once established on a beach it is capable of forming dense monocultures and displacing native species.  It will spread well inland and is toxic to animals.
So far Dune Onion Weed has been found on three local beaches a considerable distance apart.  It could turn up on any of our beaches and may well be found growing well back in and underneath the dune vegetation.

If you find or suspect you have found this weed please let me know, if possible including a photo with your email. The best way to control the plant is to dig it up, bag it and remove it from the site for safe disposal. 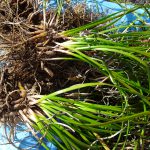 View all posts by Jean/Admin →